None of Joseph Pilates’ 8,000 Students Died From The Spanish Flu That Killed 50 Million People 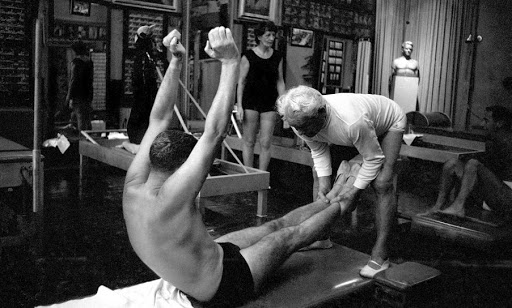 06 Apr None of Joseph Pilates’ 8,000 Students Died From The Spanish Flu That Killed 50 Million People

Posted at 11:25h in Blog, Fitness, Lifestyle, Wellness by marketing

We all know how great Pilates is… but can it save lives?! It seems like it did back in 1918!

The modern Pilates studios we know today are far from how it all started a century ago, when Joseph Pilates first began developing his method. His teachings, however, remain as valuable and relevant as ever.

Born and raised in a small town just outside Dusseldorf in Germany, Pilates was always passionate about fitness. Having been a sickly child who suffered from asthma, rheumatic fever and rickets – and who was often bullied by his peers for his poor condition – Pilates became determined to improve his health. He dedicated his life to developing and perfecting his ideas on health and fitness, studying various exercise methods to expand his knowledge.

As he got older, Joseph overcame his ailments. He moved to England in 1912 to work as a circus performer, self-defense trainer and professional boxer. When World War I broke out in 1914, he was among the thousands of “enemy aliens” imprisoned at an internment camp on the Isle of Man. It was during his time at the camp when he began to intensively refine and test his method of physical conditioning, which he called Contrology. Between 1914 to 1918, with the prison camp as his very own “studio,” Joseph taught his physical culture to over 8,000 internees. He worked on rehabilitating those who suffered from diseases and injuries, and also taught fellow detainees skills in wrestling and self-defense. He made use of the camp’s iron beds — attaching bed springs to headboards and footboards — to create resistance exercises for those that were bedridden.

In January 1918, an unusually deadly influenza pandemic struck. Although it was named the ‘Spanish Flu’ because it was particularly bad in Spain*, experts point to the US, UK or China as likely the origin. The pandemic went on to infect 500 million people, practically 25% of the world’s population at the time.

After a three-year run, the influenza died down in December 1920, but not after killing up to 100 million people – claiming three times the number of lives as World War I, which it overlapped. Strangely enough, the usually vulnerable young and elderly were not the hardest hit demographic; the flu’s second wave of heightened mutation wiped out typically resistant populations of young adults between the ages of 20 to 40.

During this time, Joseph Pilates was at his internment camp, of which there were several during the war. Most were harshly affected by the deadly outbreak, but astonishingly, not a single one of Pilates’ 8,000 internees – whom he was teaching his Contrology exercises – passed away from the flu! A testament to the effectiveness of his method?

How Pilates boosts your immunity

Pilates’ camp was hardly any different from its wartime counterparts in that it featured crowded conditions as well as detainees of varying backgrounds. However, it became an outlier thanks to Pilates’ rigorous system of exercises in which he trained the detainees day after day. Years of following Pilates’ methodology was said to have boosted immune systems among the camp’s population.

How does Pilates specifically strengthen the Immune System? Flex Studio’s Director Heather Thomas Shalabi explains to us in this SCMP article. To summarize, it all has to do with the lymphatic system, which makes up the body’s immune system, whose network consists of vessels and nodes that remove waste from the body. Lymph fluid (a form of blood plasma) collects this waste from cells and transports it. Inactivity can significantly restrict lymph flow, and lead to a build-up of waste and toxins believed to play a role in inflammation and disease.

How does exercise help us manage this? Through muscle contractions and manual manipulation, the lymphatic system manages to isolate and eliminate infection and cellular waste. Deep breathing, exercise and massage, therefore, are great ways to encourage lymph flow and maintain the health of this essential system. The movement created by combining deep breathing with stretching has proved to enhance lymph circulation.

Why is Pilates especially effective in boosting this system? Because it works on the two main muscles that promote lymph tissue movement throughout the body: The Transverse Abdominus (or the ‘Powerhouse’ called upon in every Pilates move) and the Calf Muscle. According to Lindy Irwin of Authentic Pilates Austin, “Every movement in Pilates by its very design is aiding in the movement of the lymph in your body, which is your innate immune system helping you stay healthy.”

As we face another epidemic, Pilates’ teachings remain relevant as ever. Having a holistic approach to our health has never been more important. More than improving physical strength, flexibility and mobility, practicing Pilates helps to strengthen and boost the immune system, allowing us to fight off the many illnesses that threaten to harm our bodies daily. Definitely a reason to keep up your workouts this season!

It’s never too late to start Pilates! We offer Live Stream classes for those who would like to practice from the safety of their homes. Click here for our latest promotions. *History.com explains that the flu of 1918 became known as The Spanish Influenza because newspapers censored the numbers of infected and deaths in Germany, the UK, France, and the US to keep wartime morale up. In politically neutral Spain, however, the papers were allowed to give a more accurate report of the deadly numbers, which gave the false impression that it was more drastically affected.